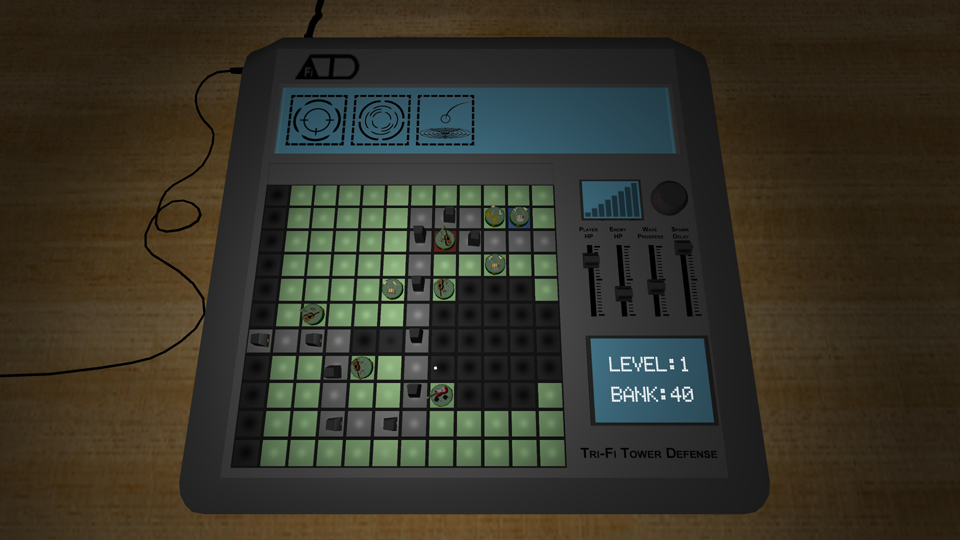 Beatpad Defender is a musical tower defense game. The goal is to stop the incoming creeps (enemies) from taking control of the beatpad. The player must place guitar (projectile), drum (area of effect), and cymbal (splash) towers to defend the beatpad controls. The placement and upgrade configuration of the towers will create a unique musical experience on every play through.

Our small team, consisting of a producer, two designers, an artist, and a programmer worked hard to develop the prototype. After brainstorming a number of different ideas, our team agreed on a tower defense game involving music. 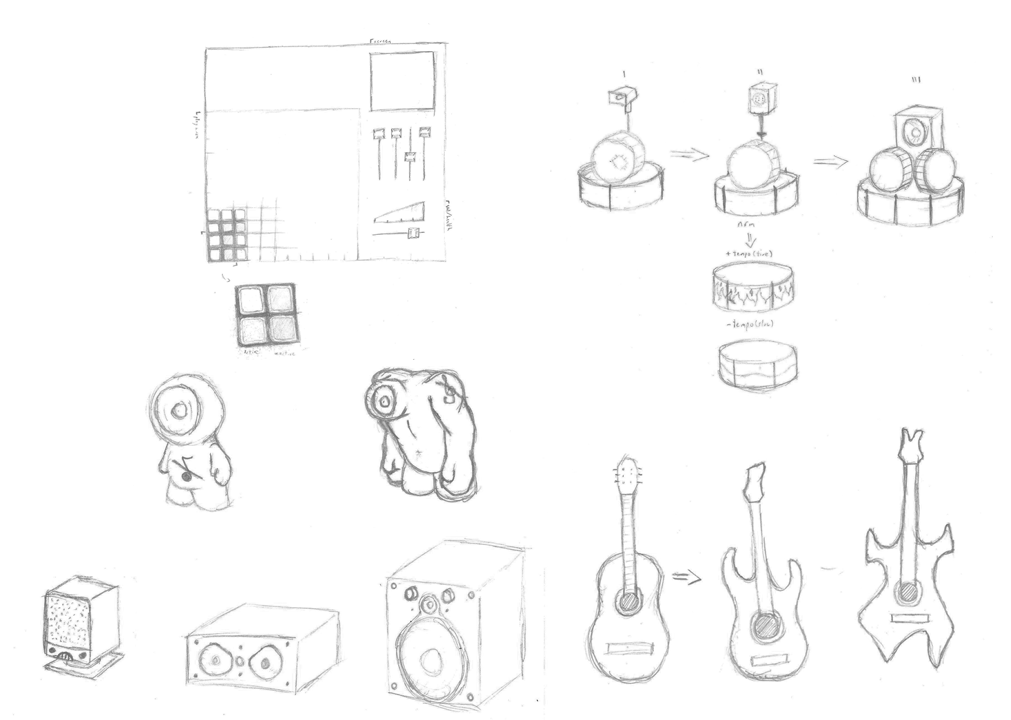 During the conceptualization faze of development, our artist, Joshua Stowe, quickly sketched up the basic components of our game. The above sketches show the initial beatpad, towers, and enemies. When we completed the prototype, the game closely resembled the initial concept.

As a team we chose to use Unity3D. Unity3D enabled us to quickly prototype our tower defense game. The project was managed using Redmine, and collaboration was done using a git repository. 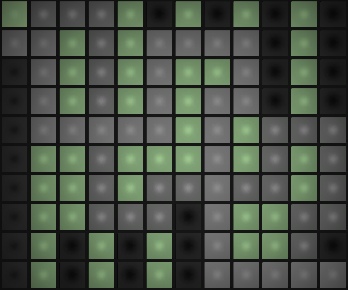 The tile maps (i.e., the beatpad playing fields) were created through a simple text file system. With a list of keys, the designers could construct a new map by creating a grid of keys to represent the map (normally 12 x 12 or less).

This system worked well for the scope of the project, but in the future, I would consider creating a GUI editor to simplify the process. 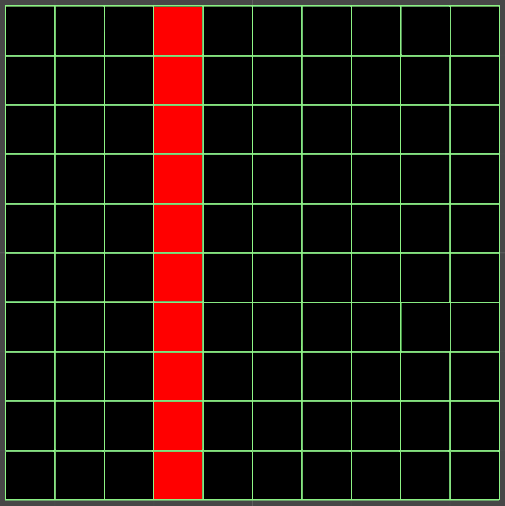 Setting the tower to play on certain notes or beats will change the rate of fire. The following functionality demonstrate the process of moving the tempo bar and activating towers.

Configuring the tempo bar and towers will significantly alter the gameplay experience. Increasing the BPM can take the game from a relaxed to urgent state. As of now, the BPM is constant in each level. It might be interesting to try creating a mode that changes the BPM at different point in a level or after milestones (e.g., a power-up for killing 10 enemies).

The prototype contains three towers: guitar, drum, and cymbal. Each of the towers contains three upgrades, which alters the visual, the sound , and the stats.

The guitar tower is a base tower that rotates and fires projectiles in a single direction. To accomplish that behavior the tower does the following checks and actions:

The drum tower is an area of effect tower, which fires projectiles in all directions. To accomplish that behavior the tower does the following checks and actions:

The cymbal tower is splash tower that fires projectiles and causes splash damage over time after a projectile collision. To accomplish that behavior the tower does the following checks and actions:

All three enemies act in the same way; they move from tile to tile until they die or reach the exit. Each enemy is given a set of unique values (i.e., health, armor, and speed).

The enemies follow a pre-defined path loaded in from the map text files. When an enemies reaches a corner, I determine the new direction, and rotate the enemy models accordingly. 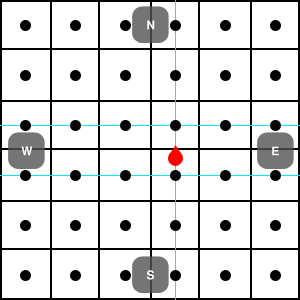 Enemies move between the centers of the tiles. If an enemy is moving between two tiles, then we know that the enemy is aligned with at least one of the two axes (see the above diagram). Using a simple if-statement I can easily determine the direction the enemy is facing:

By doing that check, the enemies will be faced in the same direction as their movement. If an enemy dies or reaches the exit, the model is removed, and the player is rewarded or punished, respectively.

Instead of endless stream of enemies for each level, the enemies are spawned in waves. Each level contains a text file detailing the waves to spawn. The enemy wave text file looks like:

After reading in the waves, they will be spawned in succession. To alleviate pressure on the player, the waves are spawned with short pause in between. By default the pause is set to two tempo bar passes; however, the pause can be configured to the preferred length of time.

The top display contains information about the towers. When a level starts, the display shows the different types of towers. Towers can be purchased from this screen by dragging the mouse from a tower icon to an empty tile. If one of the tower icons is clicked, then it will open the tower details.

The tower details show the basic information about the tower: range, rate, and damage (currently missing the cost of the tower). Like the initial tower screen, towers can be purchased by dragging the mouse from the tower icon to an empty tile. After purchasing a tower, the player can click the tower to show it’s details.

The purchased tower’s detail menu shows the current stats, the potential upgrade stats, the cost to upgrade, and the payment for selling. Using the on-screen buttons, the player can upgrade the towers up to three times as long as they have enough money.

The side display shows the level, wealth, player damage, enemy damage, wave progression, and the spawn delay (i.e., the time before spawning a new wave).

We used several native beatpad controls and displays to present the player with information. The volume is displayed as a bar graph in an LCD screen; the currents status of the game is displayed through four sliders; and, the level and wealth are displayed in another LCD screen.

As a prototype, this demo does a good job in demonstrating the core mechanic of our game. If this were to transition into a full game, then there are a number of needed improvements.

The enemies are currently limited to following a single path from point A (entrance) to point B exit. The inclusion of dynamic pathing or the use of multiple paths at the same time might improve the experience. A dynamic path would involve giving the enemy a start and end point, and it would search for the path of least resistance. The player would likely have to use the entire map to defend against the oncoming enemies.

The enemies currently follow a single path, and spawns are delayed between enemies. It would be more exciting if enemies spawned as mobs or swarms. To do something like this, I would have to make sure that enemies only spawned in unoccupied spaces. The enemies would also have to navigate around each other if they moved at variable speeds.

All of the menus function in their current state; however, they could all use a facelift to better convey the necessary information. Simple things like graying out unavailable information or creating popover menus for towers would make a world of difference to the user experience.

The initial concept included animated enemies with special entrance and exit animations. As we expected, time would not allow for extensive animations. The static models work perfectly fine for functionality, but they don’t create the immersion that animated models would. Animations could include attacking towers and the beatpad.

As a game centered around music, the use of sounds is the most critical component of the game. For the prototype, we used a limited sound bank, that included unique sounds for each tower and tower upgrade. This yielded twelve sounds, I think it would be beneficial to give the player the opportunity to configure tower sounds to their liking. It might even make sense to tie it into a level progression or reward system. As a musically focus game, it makes sense to allow for more sound configuration.

It might be interesting to consider a touch based version for tablets that includes a functional beatpad. Maybe a networked multiplayer version involving players on both defensive and offensive sides. There’s never a shortage of improvements or new ideas.

Building the prototype took a lot of work, and while hectic at times, it was a pleasure to develop. Thanks to everyone on the team! (Timothy Scribner (Producer), Griffen Fargo (Designer), Philip Holland (Designer), Steve Cannon (Designer), and Joshua Stowe (Artist).

Feel free to download and play the game in the current state, but please note that there are still a number of bugs.