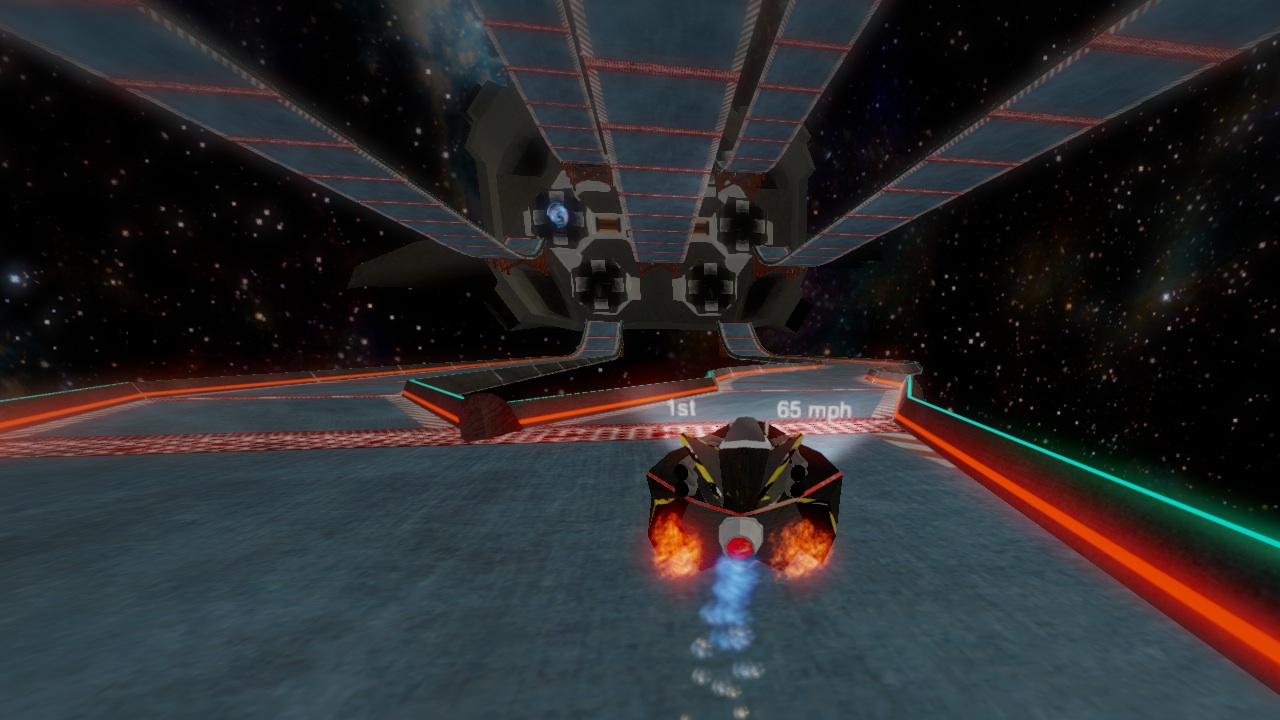 Over the course of 30 weeks I worked on a team of 1 producer, 3 programmers, 4 designers, 3 artists, and 1 qa tester. During this time I filled the role of Lead Programmer on the team. The team chose to develop our game in Unity3D, which would provide us an accessible interface and fast iteration time. We initiated the development cycle by prototyping various concepts until we agreed to develop a fast paced networked arcade racing game set near a black hole in space. It’s worth noting that our game, Sagittarii Run, won RPI Gamefest “Excellence in Visuals Award” for the most impressive moment-to-moment visual experience. 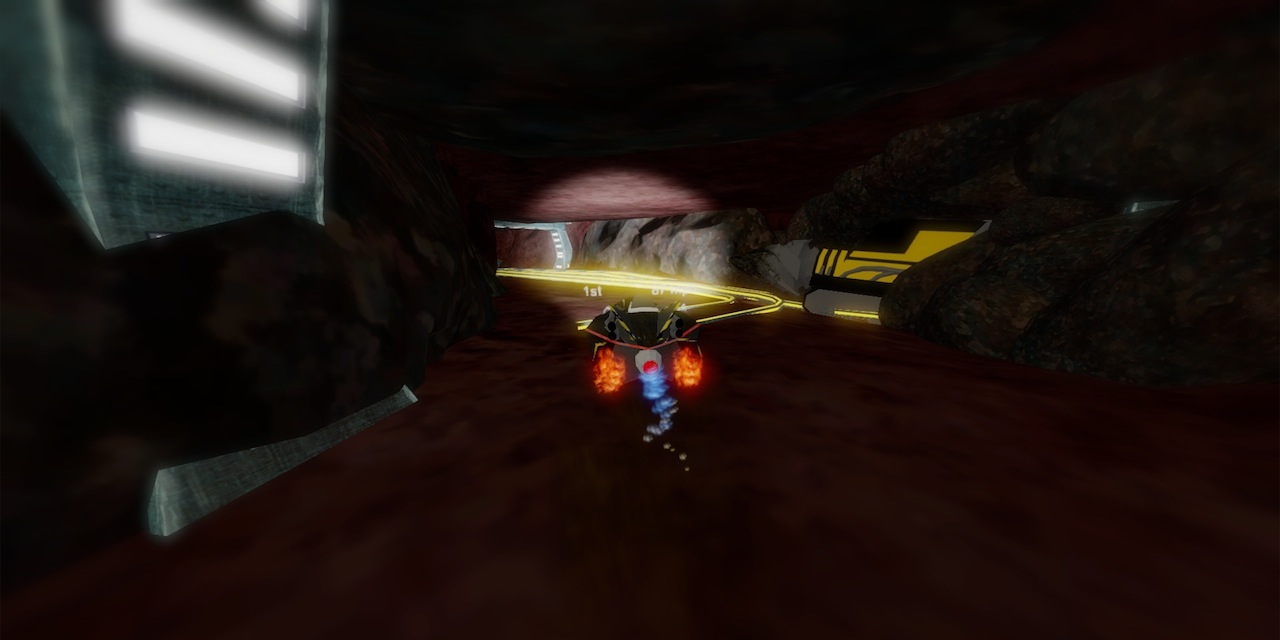 During my senior year at Senior year at Champlain College I worked on pre-production and production for Sagittarii Run. The project was kicked off with Grant Parker (Design), Jason Rauck (Design), Matt Ide (Artist), and I (Programmer). For the first three and half months our team conceptualized ideas, iterated on prototypes, and developed a vertical slice for the chosen game. Through the entire development cycle we used an agile development methodology.

We kicked off pre-production by conceptualizing numerous designs, and eventually we narrowed it down to a few concepts: a real-time strategy, a platformer, and a racing game. After analyzing and realizing that the development scope of the desired RTS game would be far too large for the size of our team and the time that we had, we chose to cut it early. After narrowing the concepts down to two ideas, we created initial prototypes to demonstrate the desired game mechanics. Prior to starting production we agreed to use Unity3D, which we found to be versatile and robust enough for any of our needs. Unity is accessible, allows for fast iteration, and capable of a high level of polish.

Over a few weeks we prototyped a platformer based around two characters in a romantic relationship. For a demonstration of the concept, we designed and developed a puzzle that had to be solved using a combination of the two characters. The designers iterated on the concept, and proposed several mechanics with which we prototyped; however, we realized that the concept in the current state was not strong enough and was not a good fit for the team.

As we were iterating on the platformer, we had also been developing an initial prototype of our racing game. The prototype demonstrated the high speed experience along with a dimension switching mechanic which would be pivotal to the game. As a team, we realized that we all had a strong interest in racing and motor vehicles, so we came to the consensus that developing a racing game would be the best fit for the team.

After iterating on different concepts and coming to a decision, we began developing out racing prototype into a vertical slice of our desired vision. In addition to developing the game in technical, design, and art facets, we also spent time researching and planning the desired goal for the completed game at the end of production. There were a few pivotal technical components to the game that had to be implemented to bring the game to a functional state and prepare it for the vertical slice: this included hover car and general racing mechanics, networking, the node system, and dimension switching.

The hover car and general car mechanics took a lot of time to get them into a playable state. Racing mechanics alone should not be underestimated, and adding hovering adds a significant amount of complexity. With a lot of research, iteration, and testing I was able to get a working hovering system in place that functioned well on heightmaps, environmental objects, and extreme ramps (e.g., a loop). The implementation was sufficient for our needs at the time, but would need to be refactored into a more robust solution later.

As a racing game we wanted a competitive four to eight player experience. We accomplished that by networking the game. Introducing networking meant that we had to consider issues like choosing between client-to-client and client-to-server, latency, and smoothing data. After some iteration and testing we had the cars networked and moving smoothly. While there are limitations to Unity’s networking solution, it made it relatively quick to implement a working solution; we even had networking working in one of our initial racing prototypes. 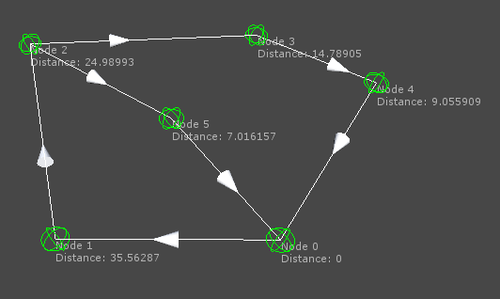 Now that we had a functioning car in the desired form, it was time to implement the waypoint system, which was critical to tracking the players and applying gameplay events. For details on the system, see my previous entry here. While doing that system, I also became familiar with extending and creating custom editors in Unity. This reduced the setup time significantly, and made the setup process reasonably easy. Since then I’ve become quite a bit more familiar with extending the editors, creating new views, and adding custom manipulation for the scene which could further simplify the process of creating and using these systems. 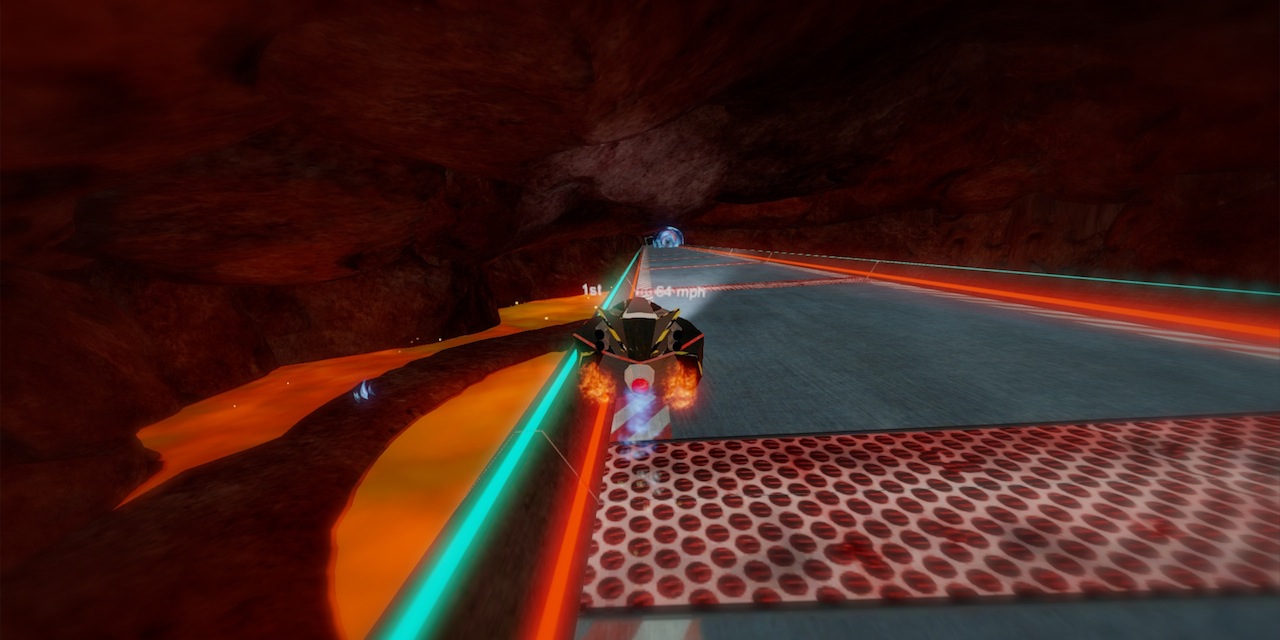 After exploring various concepts, prototyping, and creating a vertical slice of our desired experience we moved into production where we fulfilled the play experience that we set out to achieve. In production, our team expanded from four to twelve working tirelessly for fifteen more weeks to refactor, implement, and polish all of the systems in the game. 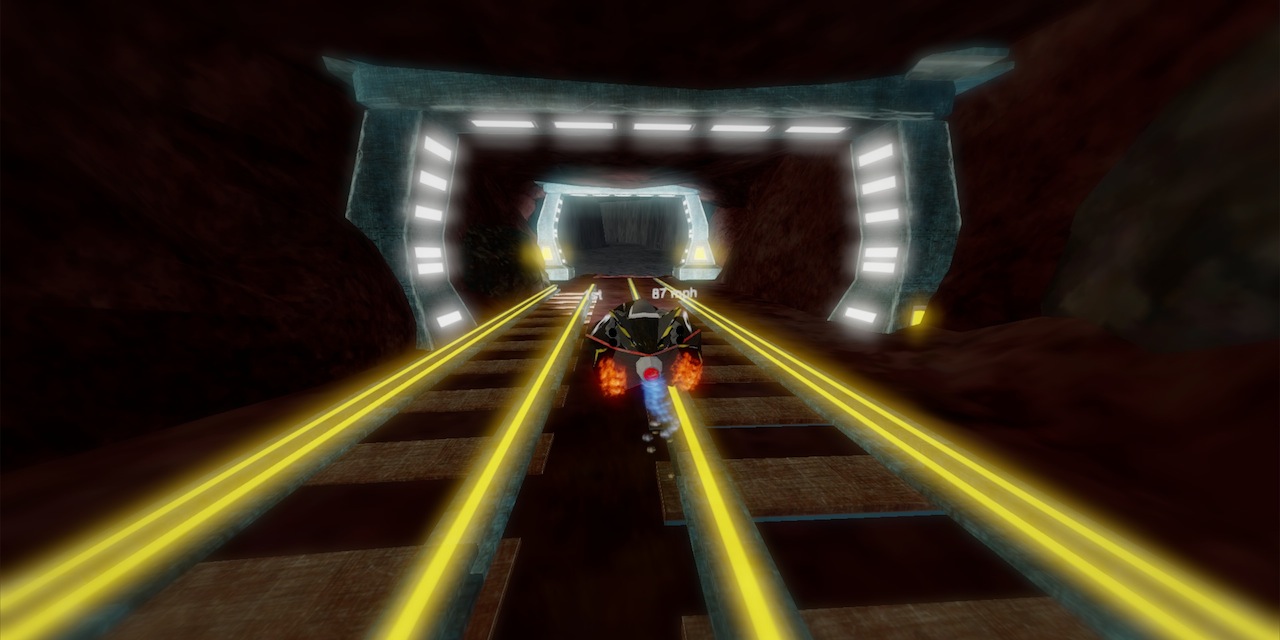 There were a few major changes that the team decided to make starting at the beginning of production. Those included: changing the race from a loop to a sprint, defying gravity, and overhauling the dimension system.

Since there were a lot of changes in elevation throughout the track it meant that at certain point the player would have to fight an up hill battle to get back to the start line. Changing the races from a loop to a long sprint (between 4-7 minutes per track) gave the player more variety and alleviated the elevation based issues.

In the initial prototype, the loop obstacle was the only way to challenge gravity. In the final game we wanted the player to be capable of driving on surfaces in all directions. In one of the finished tracks, there’s a massive space ship that the hover cars fly into; in the ship they race together on the floor, ceiling, and the walls. It’s a far more intense experience especially when you see other cars racing upside down.

Finally, the initial dimension system that we had was confusing and led to a lot of difficulty for players. One of the dimensions would mutate the state of the track around you, but often that would disorient the player and lead to them crashing. To solve this and another problem, we decided that would we transport the player to a separate platform where the goal would be to avoid the obstacles and reach the end of the rift. The reward for going into the rift was getting an advancement on the track, which would move the car closer to the nearest car. For cars struggling to stay in the race, this was a great solution to rubberband the players together and create a tight grouping. By revamping this system, this increased the amount of fun and competition that was experienced as players competed. 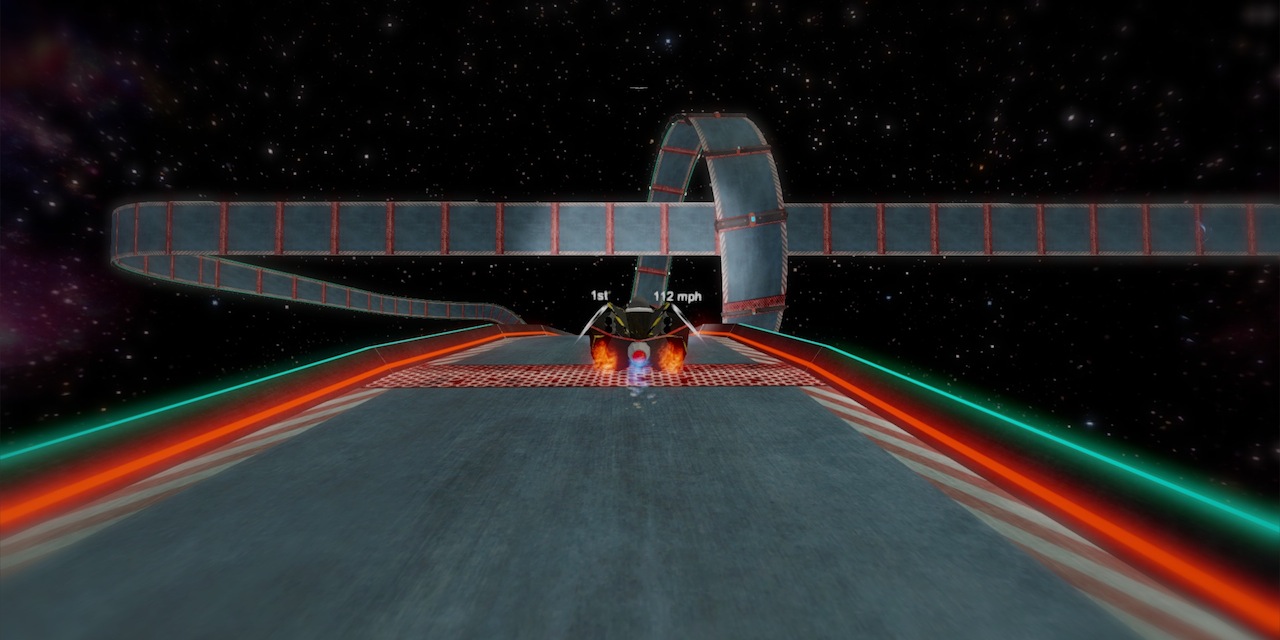 As programmers, we worked together to refactor and implement these changes into the pre-existing game. It took a lot of iteration to get the hover car working in all directions, but it eventually came together. We considered and tried a few different approaches, including: raycasting the environment to determine the appropriate response for the car, using a loose connection to a spline to keep the car on a desired path, and using trigger volumes to realign the player on the track. Based on our conceptual considerations and testing, we found that the trigger volumes provided the most consistent and reliable result. The new system allowed the car to realign to any surface with the appropriate volumes. If we had more time, we could have even extended the editor and scene view to support quick placement of volumes along the track. 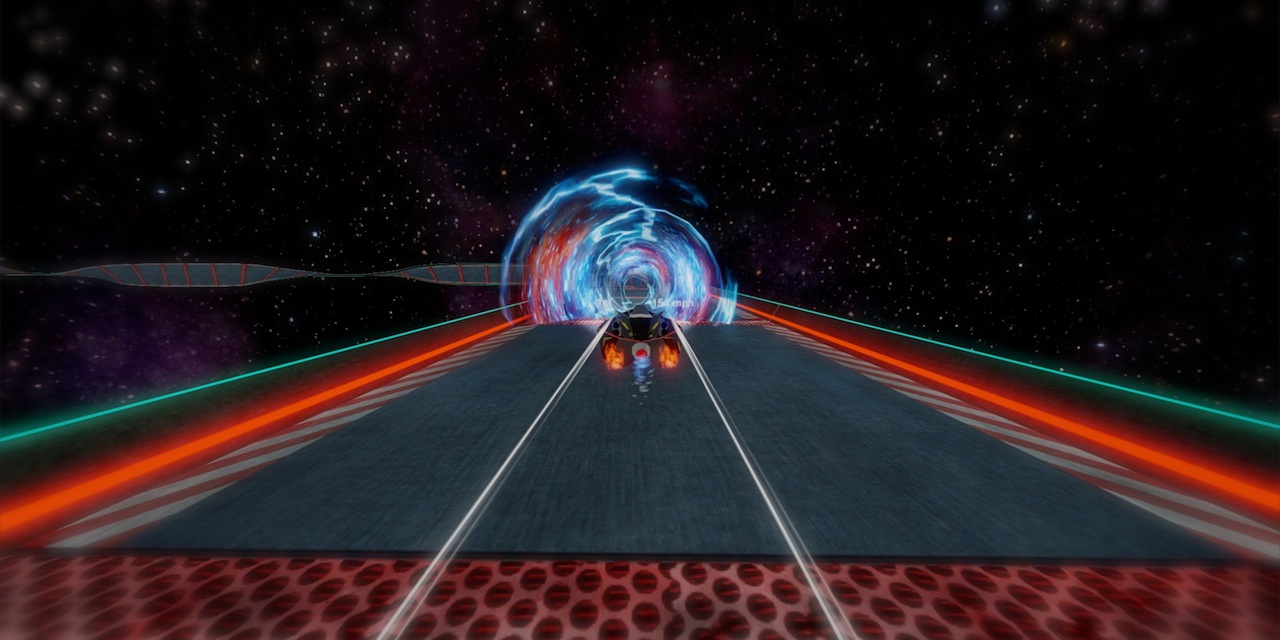 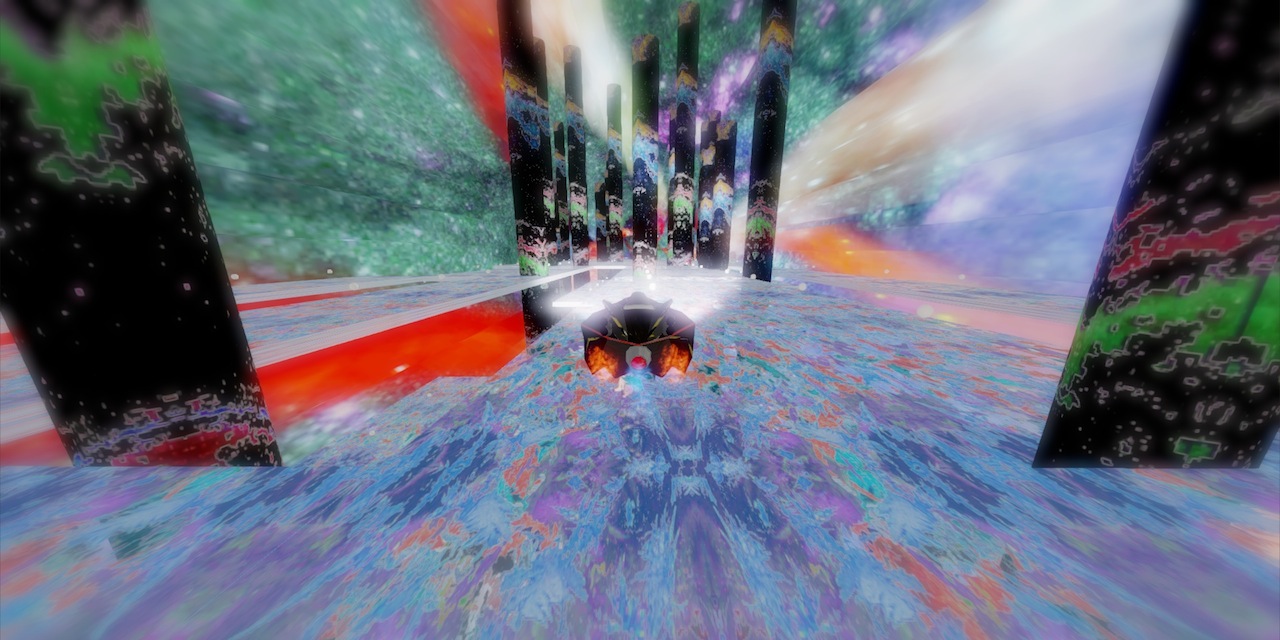 The other most significant change was improving the wayoint system to better support dynamic rift spawning and creating a rift area where players would try to traverse a platform impeded by obstacles. The new rifts were far more fun and created an intense challenge for a few moments. The rift included dynamic spawning of obstacles and falling platforms. 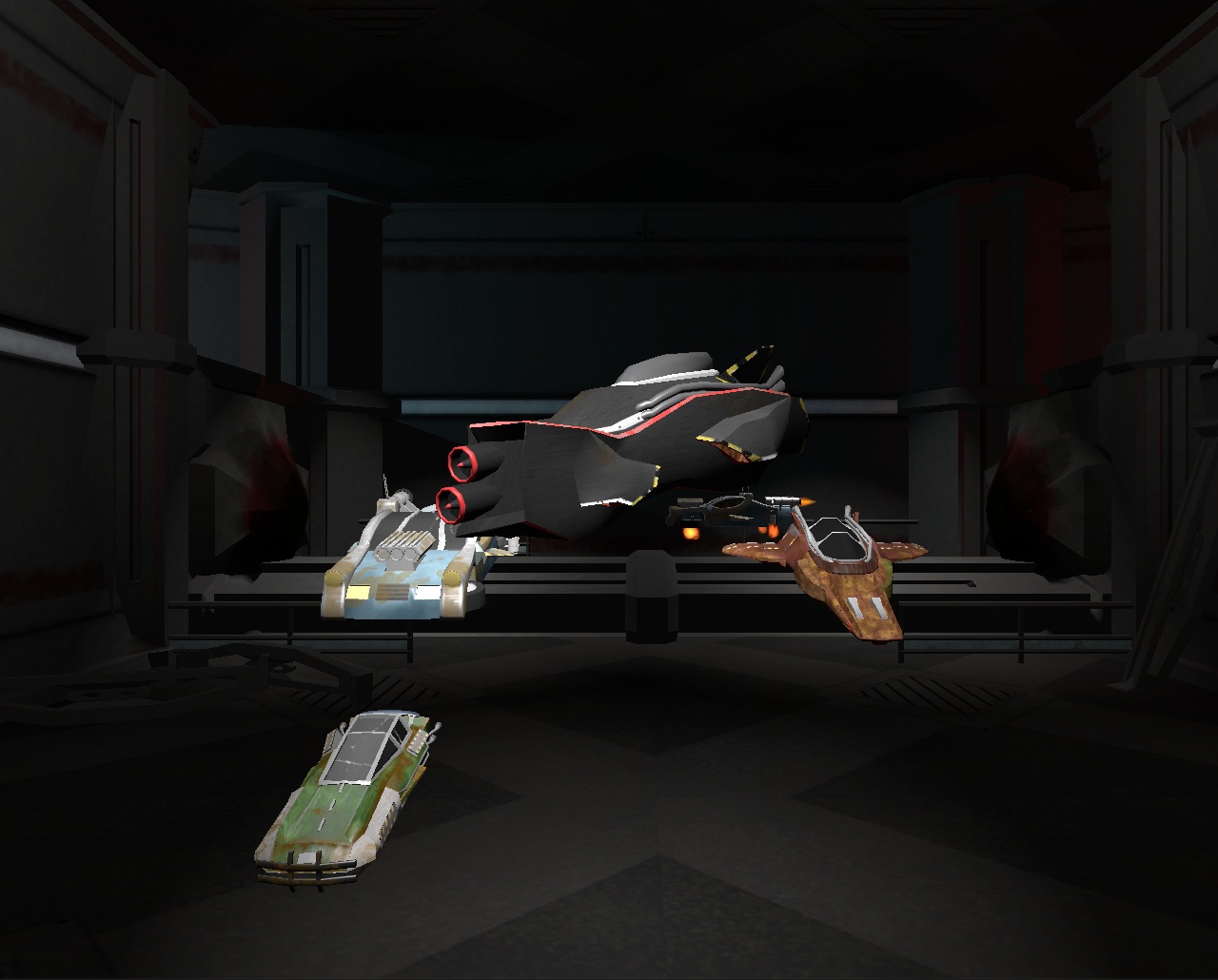 In addition to the gameplay, it was necessary to have a complete GUI that was consistent with an arcade experience. We kept the options to a minimum, and created a very engaging car select screen and level select screen that could be controlled with a racing wheel. 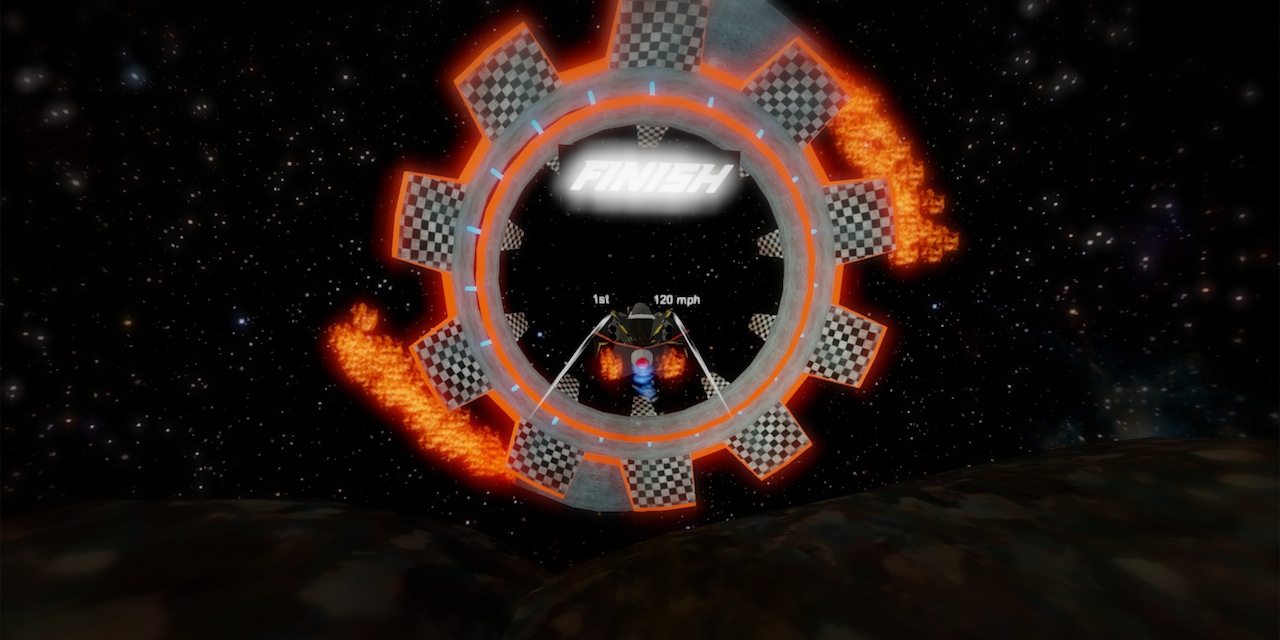 In the final weeks of the project, the team worked hard on all front to polish and remove any bugs from the game. The levels were tweaked, the art was given the final touches, and the code was improved to remove any know bugs.

A lot of time and work was put into this project by all members of the team. The experience was really gratifying and helped to reinforce previous experience I’ve had working on large teams on game development. As with other projects I’ve worked on, this has helped to confirm my interest in working with really passionate people in such a creative environment! 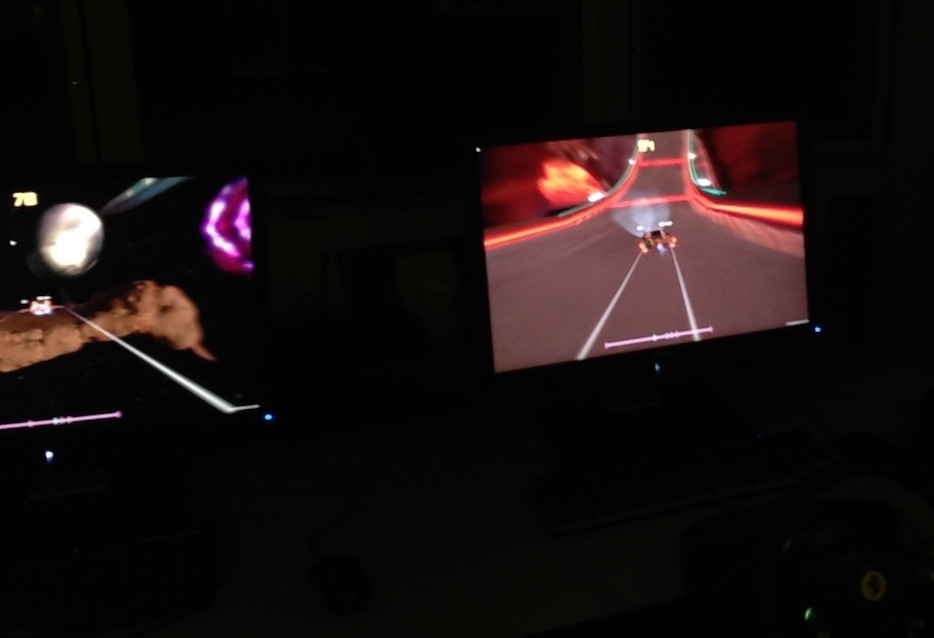 At the end of the semester all of the teams presented their finished games to fellow students, professors, and numerous game developers from the east coast. It was exciting to officially reveal the finished game that we had been working so hard on. Along with the presentation, anyone was able to jump on a computer and join a racing session.

The process of designing, visualizing, programming, and bringing a game to life with others is an amazing process that I want to continue to be apart of in the future!